Join us on Facebook every Friday for our Feature Vehicle Fridays.

This week’s feature vehicle belongs to Carmella, who will be driving her Chevrolet Camaro in this year’s Classic.

Carmella wrote to us earlier this week:

My love affair with the 1969 Camaro has only recently developed. I think anyone who owns and drives a classic car will tell you it’s more than just a car, it’s a passion, a lifestyle, it’s history. It’s a culture, one that I share with many people including members of both the Comaro Comrades and the Chevrolet Performance Association of SA. I drive my Camaro whenever I can, attending events across South Australia and Australia. I rarely drive in the same car with my husband, think we’ve been given the nickname Mr and Mrs Camaro…

I used to own a 1949 Chevy Thriftmaster Pick Up Truck which I ran in one of the Bay to Birdwood Runs. But I made the decision one night to sell the pickup and look for something else- a Chevy of course. The very next day was my 2nd cousin’s wedding and he arrived in a 1969 Blue Camaro. I loved it….Let’s say it was one of the most expensive weddings I’ve ever attended as I made a deal later that day to buy that Camaro. In honour of his father who passed away the year before I got custom plates to name the Camaro after him as he spent many hours with the previous owner working on the car.

I just love the stance of the 69 compared to the 67 or 68. It was given a substantially sportier look, the grille was redesigned with a heavy V front fascia and the reworked rear quarter panels together with the skinnier three block taillights gave the 69 a much lower, wider and aggressive look. This styling would serve for only the 69 model which makes it unique and it has been considered one of the most beautiful cars of all time.

This will be my second Bay to Birdwood with my Camaro. I’ve lost count how many Bay to Birdwoods I’ve attended over the years in our other classic cars including my husband’s 69 Camaro.

I just hope I don’t have another incident on the way down to the starting point like last time when a kangaroo decided to bound into the front right side of my fender denting my Camaro and cracking the front grille. Being such a solid car let’s say the kangaroo’s life span came to an end! 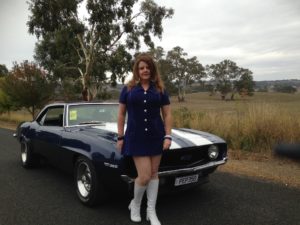